Across 14 (yes, FOURTEEN) series of Dragons’ Den, the Dragons have seen hundreds of pitches, ranging from the surprisingly brilliant (Reggae Reggae Sauce) to the downright silly (Tingatang Jewellery).

While some products have gone on to become huge successes after appearing on the show (whether they got an investment from the Dragons or not), we feel that there are other underrated and somewhat forgotten inventions that deserve another airing. And not just because we want some freebies sent our way, honest.

Here are just a handful of the best products shown to the Dragons, along with what happened next.

An item so simple we’re surprised it didn’t exist before. Neil and Laura Westwood’s Magic Whiteboard allows people to rip whiteboards off a roll, then stick them to any hard surface and use them like a regular whiteboard.

The company is still active, and you can purchase all kinds of versions of the product via its official website. It has also reached over 20 countries and is in over 500 stores worldwide.

How many times have you been out and about and suddenly it starts pissing it down with rain, and you don’t have an umbrella? The Umbrolly would have provided simple vending machines containing cheap but sturdy umbrellas at most underground and rail stations across the UK. Imagine how awesome that would have been.

Sadly, Charles Ejogo’s deal with the Dragons collapsed after the show, but he took Peter Jones’s advice to set up a new company without his original business partners. After working with other investors and partners, a smaller vending machine was launched in late 2007, and it gradually grew across Europe and the US over the next few years.

By 2010, the UK arm of the business folded, but Charles’s business still provides consultative services, and overseas sales of its products to new and existing customers, so he’s doing pretty well for himself. But we’re still wet.

We all love a boiled egg from time to time. But it can sometimes be quite a faff, what with the boiling of the water, then the making sure the egg doesn’t break, then the mucky washing up business. All for a bloody egg. Okay, this is the ultimate first-world problem, but still.

James Seddon came up with a great little product that removed water altogether and managed to perfectly boil an egg with minimal mess. However, despite securing a decent deal from the Dragons, the Eggxactly STILL hasn’t reached the shops after 11 years.

It does has an attractive website where you can sign up for updates, but this looks like the kitchen equivalent of Superman Lives or the Sandman movie, languishing in development hell for all time.

Here’s one that actually provides a service and potentially saves lives, rather than offering us a water-free boiled egg.

This simple device allows kids’ seatbelts to be easily adjusted by height, so that the seatbelt doesn’t irritate the child, and it also stops them from placing the belt under their arm (we all did that).

After selling well in various retail outlets for a number of years, the business dissolved in 2011. Sadly, inventor Peter Sesay later died from cancer.

Not exactly the most sexy product to write about, but this simple little invention not only allows you to tie together all your loose wires, but it cuts out the waste of regular cable ties, thus helping take care of the environment while also making your desk area tidy. Win-win.

Shortly after the deal, one of the world’s leading plastics distributors, Hitachi-Maxell, secured a £36m contract for the Rapstrap, making it one of the biggest success stories from the show.

You can now buy these clever little straps all over the place, including the official website. 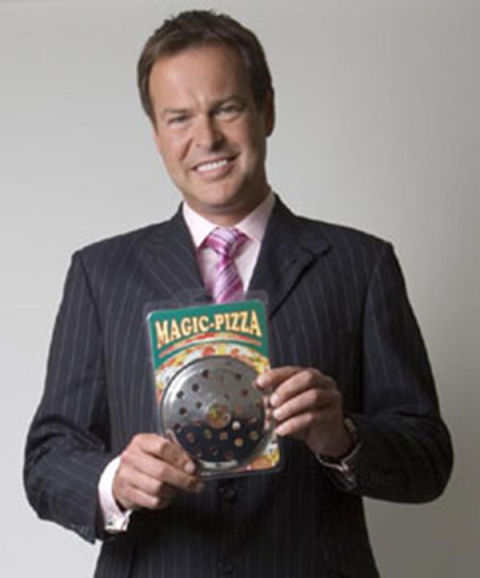 This ‘magic’ device (a bit of aluminium) looked silly at first, but it turns out that it totally eliminates the dreaded ‘soggy middle’ when cooking a pizza in the oven.

Despite Raymond Smith’s pitch being described as “one of the worst ever”, Theo Paphitis and Peter Jones took a punt. And judging from Amazon reviews, customers loved it while it was on sale.

Sadly, it seems that the Magic Pizza cannot currently be purchased online, as both its website and Amazon are currently out of stock. We’ll have to make do with soggy pizzas for the time being.

This neat little invention allows bartenders to pour a perfect pint without having to actually hold the glass, allowing them to sort out other customers and saving a lot of time in the process.

While we kinda like the experience of a human being pouring a proper pint and not an emotionless robot, this would at least solve long waiting times at the bar.

Despite securing a deal with two of the Dragons, we’ve still not seen a single one at any bar or pub, but their website is still taking enquiries so there’s a chance it will begin popping up one day.

This clever and cute product has probably made its way into homes of many parents across the UK. James Roupell’s invention is a four-in-one product for kids: a soft toy, a backpack, a travel pillow, and it also contains a blanket inside.

Bobo Buddies are still going strong, with various animals on offer from lions to monkeys to giraffes. We wish they made adult versions. Just us?

Copyright ©2017, TopTenProducts.com. All Rights Reserved.TopTenProducts.com is a participant in the Amazon Services LLC Associates Program, an affiliate advertising program designed to provide a means for us to earn fees by linking to Amazon.com and affiliated sites. Top Ten Products participates in various affiliate marketing programs, which means Top Ten Products gets paid commissions on purchases made through our links to retailer sites.